Un-fucking believable. Seriously. This powerhouse of these women is unstoppable! Ok, let me back up... I must first admit my ridiculous girl-crush on the fabulous Carrie Brownstein. 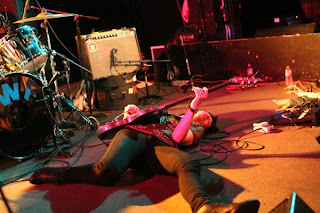 GREAT review on DCist.
I literally can't help myself from being in complete awe of this woman. You may know her from one of the following:


1. Formerly, she shared a space on stage in the now-defunct Sleater Kinney with fellow Wild Flagger Janet Weiss
2. Wrote this amazing blog called Moniter Mix on NPR that I only wish I could be as cool to come up with.
3. Has managed to co-create the hilarious show Portlandia with comedian Fred Armisen.
I mean, really. Not to mention, you know that old saying that we are secretly all attracted to people who look like us? Well, we do kinda look eerily alike, you know, back when I had long hair. You think?

But Carrie is hardly the point of this post. The new super group, again supported by the great Merge Records, and proclaimed as what "the sound of an avalanche taking out a dolphin" would be like, Wild Flag is totally what we needed to shake things up around here. Joined by Mary Timony and Rebecca Cole, The Black Cat packed a crowd full of fans who completely enveloped the racing new sound of these magnificent ladies. Ripping rock back to its core, beating the drums to death, and managing to look fabulous is nothing short of the best time ever.
Not to mention, I had just spent several hours of pre-show prep hanging with my own killer ladies getting a mad wine buzz on. If you're gonna come armed to a show... you better do it right. And boy did they do it right in return. Wild Flag rocked my Thursday night so wholly that I woke up Friday still buzzing with awe (or was that the wine?). I couldn't help but smirk at the madness I had been a part of, and think to myself, I really hope I get to see these ladies again. They deliver their talent with such heart, so naturally, it's inspiring, and raucous and makes you wish you could rip like that too. Alas, I am not one of the leading rock guitarists of the 21st Century, but I can hope that the things I'm passionate about come out of me with the same amount of gusto.
Posted by Unknown at 8:58 PM No comments:

If you really want to know how this show was, check out Wye Oak Live on NPR. But if you're just here for me, then please continue... First of all, this was Night Three of show going, and followed seeing Wild Flag the night before which couldn't be any more different of a band, except for the lead singers both being female. I was feeling less than enthusiastic enough to stand for the whole show, though I'm not suggesting that I wasn't enthused to see Wye Oak, but sometimes you just want to sit, listen and enjoy. Plus, the drinks flow if you sit at the bar. ;)


That said, Wye Oak was incredible. These Baltimore natives lucked into a sold out crowd and the aforementioned live feed on NPR. The new album Civilians is top notch, and the performance was too. Andy Stack and Jenn Wasner are a happy and talented duo who manage to make their often sad and heavy-layered sound echo across the crowd to create a serene environment. Jenn's voice is oddly deep for seeming somehow light as air. She makes lyrics like "I can't sleep until I see you sleeping/Curse my mind and its all-seeing eye" feel like you might have to hold your breathe and hope someone finds some rest or you too might not sleep for days. An beautiful show, filled with sorrow, hope, love, life and all that floats in between.


The only part of the show I didn't appreciate was when I spent most of the night with a seemingly nice and flirtatious gentleman who let me leave without even the slightest hint of interest. Must be one of those douche bags who goes out and hits on girls but secretly has a wife and kid at home. But that is neither here nor there in terms of the performance and I dare anyone say they didn't have a good time.
Posted by Unknown at 1:38 PM No comments:

As promised in this post, here is the first review. I showed up to The Black Cat to find that they no longer have PBR on tap (damnit!), but the tall boy was obviously ok as I was just in time to catch the end of the first opening act - Blair. I was bored to tears, so I left and went to sit at the bar and wait for Yellow Ostrich to come on, who I was looking forward to. They were a much better performance, and I'm glad I didn't ditch the show all together.

That is, until Say Hi came on. Talk about an ugly band, my god. And completely mediocre. I mean, I didn't go in expecting them to blow my mind, but I did go with the expectation that it would be a good time. It was not, and by that point, some dude named Eddie had shared his giant shot of whiskey with me and Chuck the bartender had decided he liked my company and given me another one for free. I was feeling no pain, people, except for the mediocrity of the Seattle-based set.

If you are going to claim Seattle as your base, you better be able to place yourself up with the likes of Nirvana, Pearl Jam, Soundgarden and Alice in Chains. Side note: poor Alice... I guess by now you've heard about the second drug overdose to befall the band... former bassist Mike Starr bit the dust on Tuesday, likely due to a drug overdose, joining Layne Staley in the tragic tale of drug addiction (though he wasn't found for 2 weeks after his speed ball overdose).

But anyway, back to Say Hi. More like, "Say Bye" which is what I did about 4 songs in because it was that un-fun. Sorry guys, your albums are pretty good, but you put on a crap show. Maybe I have a hard time with lead singers who are the drummer? Because it was honestly my problem with Telekinesis too... which is tomorrow's show.

I'll obviously keep you posted. Oh, and the "feeling now pain" part of Wednesday night did not translate well into Thursday morning, in which I was most definitely feeling a lot of pain. Fucking hangover blues.
Posted by Unknown at 3:29 PM No comments:

I was going to go to the Middle Brother show last Wednesday at the 9:30 Club, but was feeling pretty run down after work and didn't rally in time to go. Now that I've read this Review by Erin McCann from the blog We Love DC that is AWESOME, I'm really kind bummed I didn't make it out.

However, this week, starting Wednesday night, I will be seeing a show a night for 5 nights. Most of which are Merge bands, which you dear readers should all be well aware of my borderline stalking love affair with.

Wednesday - Say Hi @ Black Cat - First time seeing these guys. I have a feeling a certain someone I don't really care to see will be there, but meh, I plan to have fun, even if I have to forgo a guaranteed orgasm for it.
Thursday - Wild Flag @ Black Cat - Carrie Brownstein!! Portlandia! Sleater Kinney! Pathetic girl crush!
Friday - Wye Oak @ Black Cat - Sporting a new album, "Civilian" that RULES. This will be time # 2 seeing this youthful and talented duo at The Cat in fact.
Saturday - The Love Language/Telekinesis @ The Red Palace - I really like the Red Palace, and I adore The Love Language, so round 3 should be excellent. Telekinesis was a bit disappointing last time, so I am lowering my expectations and just hoping for a good time. Which should be had considering these guys have been touring together for most of the Winter.
Sunday - The Rural Alberta Advantage @ Rock n' Roll Hotel with my ladies... which is gonna be really fun I think, if I don't pass out from sheer show exhaustion. I vow to write a review of each of these show, if you promise to read them.

Screw you winter... I'm taking you out in STYLE. God life is good sometimes!
Posted by Unknown at 1:23 PM No comments: